One great regret – of the many – is the Sequential Circuits Prophet 5 that I never bought in 1986 as it sat collecting dust at Music Magic. I let it get away.

Yes, the Prophet 5 is indeed a legend. The list of its users is a who’s who of musical heavy hitters. Under a skilled hand, it is capable of producing an amazing sound. It is known for having a great analog brass, atmospheric pads, bells, and atonal effects from sublime to angry. It is polyphonic; it has a built in patch memory, and a crazy modulation that scheme that allows rudimentary ring modulation and FM type of sounds. All of this was absolutely ground breaking in 1978 when it debuted at NAMM. So how did it get away? First, allow me to paint a picture.

The first time I laid my ears on the legendary Roland JX 8P, I was awestruck. The infinite possibilities were over-whelming to a 16 year old boy’s mind. Who needed friends, or girls, or sports — none of those things matter in the aura of such an amazing machine. It had absolutely everything; it was black and slick; in my mind, the vacuum fluorescent display looked super-cool in the dimmed arena stage, right before the curtains went up. Of much less importance, it also had MIDI. I had no idea what that was but it was a really big deal in 1986. 61 keys, all of which were velocity and aftertouch sensitive, and it even played 6 notes — at the same time! Then my friend Mark took it home, and all my arena dreams left along with it as my heart sank.

Mark was a year ahead of me in school and had his own band so that JX 8P might as well have been in China. In 1986, the price tag for a JX 8P was $1,695, and working as I did in a movie theater that equaled a mountain of popped corn twice the size of Everest. And that friends is a lotta sweeping.

High school boys are really good at wasting time; however, I was great at it. I spent every afternoon hanging out with Alex and Gil at Music Magic. They were my band mates and Music Magic was your average small, local, corner music store, the kind that doesn’t exist anymore. I can’t imagine SamAsh or Guitar Center letting four 16 year kids hang out for hours, touch, play and get fingerprints on anything and everything day after day. But Bob, the owner of Music Magic didn’t seem to be bothered in the least; he was the nicest person in the world. He would play really cool (and to a 16 year old, very challenging) music. I heard Purple Haze covered by the Kronos Quartet, Split Enz, Roxy Music, The Grateful Dead, Art Blakey, Joy Division, Chet Baker, etc. (I could go on) all for the first time there. Just hanging-out and talking with the guys and Bob. If all of us would have spent the time practicing instead, the band would have sounded lots better.

In front of a second hand set of Tama SuperStars, perched on a hard to reach and hard to play stand, sat a dusty Prophet 5. Had I given Bob some money and pressed him a bit, it would be sitting collecting dust here instead. But, next to the new shiny and bright (sounding) JX 8P, this wooden beast sounded dark and angry. It was an 8-track in a world of CDs (also new in 1986). Nobody told me that it needs lots of post-processing or that guitar cabinets are not really great for keyboards. There were very few presets, none of them had names and since at 16 I knew even less than I do now, I couldn’t tell them apart or make any new ones. At days end it, looked old dusty and complicated. So I passed on it. And I still regret it.

Both the Prophet 5 (the very first synth I played) and the JX 8P made quite a dent in my psyche. So much so that in time I got a JX of my very own. Maybe it is time to start looking for its soulmate.

Here is my JX 8P in the form of a SuperJX  MKS70. The eBay seller neglected to mentioned the dents and missing rack ears. Coincidently as I was researching this article I came across a nifty little PG800 emulator for the iPad. Funny enough is called the iPG800 from a company called Kentai. And being that the hardware PG800s are as rare as hens’ teeth, as soon as my temperamental MKS is up and running, we will get a copy in for testing. Stay tuned. 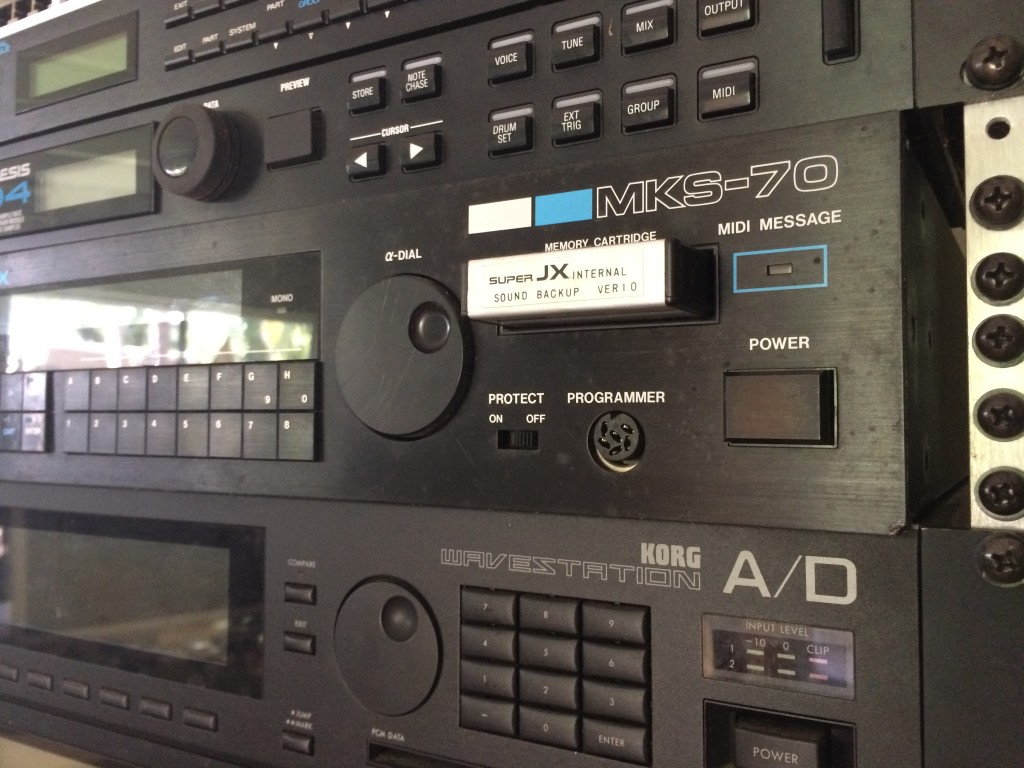