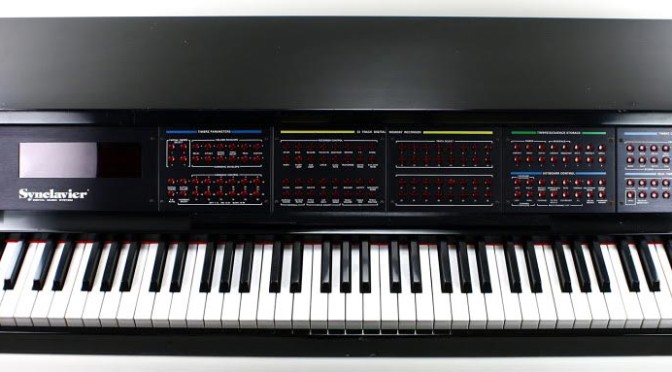 One of my greatest past-time is trolling eBay searching for objectified things that make noise. I do this with the zeal and determination of an addict on a bender.

Low and behold look what I came across: 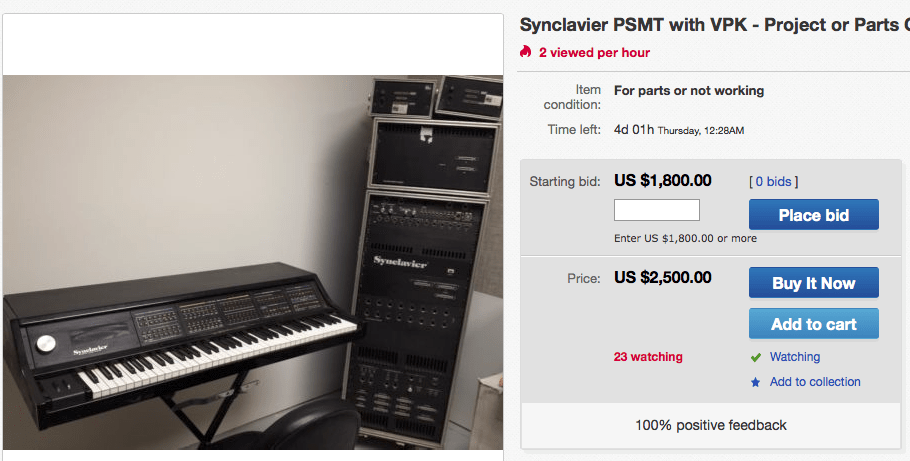 1,800 and no bidders! The world has gone mad. This very same monster (and they are monsters) in its day probably sold for more than $200,000 Dollars. I’m talking about 1986 dollars. In 1986 with 200,000 dollars you could march in your friendly BMW dealer and walk out with twenty 325’s, buy a beach front house with an elevator in Miami. To put it in other words, in 1986 Magnum Pi’s Ferrari cost around an astronomical 60K. You could have bought 3 and still have money left over for a BMW.

The Synclavier 9600 series was referred to by the late Mac World Magazine as “the most expensive Mac peripheral ever”. If you bought one NED tossed in a Mac IIx and a 20″ color screen (about 10k ) to use as a terminal emulator. Crazy, I know.

And if I had won the Lotto I would have left the 3 Ferraris in the lot and dragged a Synclavier from its New England Digital home over to my tiny room tucked away in Miami suburban hell.

So what makes this beast so special?

For starters it was massive. Here is its last and final incarnation shortly before NED shuttered its doors 1992.

There are reasons the Synclavier was so expensive. It was the some of the most advanced computing of its day. ABLE, as its main processor was called, was sent to space by NASA in 1989 in the Galileo Spacecraft — it spent 14 years in orbit around Jupiter. I bet your synth does not have that pedigree. But set aside all the cutting edge software and custom computer hardware that was purpose built by NED.  They did ridiculous things like use the same switch gear that the US military used in B52 bombers, the systems were built into custom flight cases, came with bespoke hand built wire looms, they came with furniture, and each and every system was tailored like a Saville Row suit to its new owner’s whim and fancy. This is a no holds bar – no expense spared, energy guzzling, FM + re-synthesis + sampling  music instrument.

Oh yes the same FM found in Yamaha’s DX7 but NED turned the dial to 13. If you are a fan of the sound of arguably Yamaha’s most influential instrument and by far one of their most popular. But if you thought that the awesome in its own right TX816 was the king of FM synthesis, then NED’s Synclavier will make your jaw drop. No antialiasing artifacts, a deep and defined bass rage, polyphonic and poly-timbral with up to 96 voices in later units, not enough, how about direct to disk recording. Now we take all this for granted and it one can do most of this on an iPad. But first I’m talking about 30 yrs ago, and second your iPad will never be anywhere near as impressive as 500 hundred pounds of pure 80’s excess.

Born in the seventies it came of age in the crazy cocaine fueled eighties but like all the truly greats it died before its time and left us (me in particular) wanting more of its ridiculous excessive magic.

Sure all of you would love to see the beast above resurrected. Hit the donation link down below and click all the ads 1800 times, I’ll pay for the gas to pick this orphan Synclavier II in New Jersey myself.

All well and good how does it sound and who used it?

Well in the 80’s it sounded out of this world and as to who used it, everybody — from Depeche mode to Frank Zappa.

Here is a (surely) a partial list from Wikipedia

[ebor_one_half] Tony Banks of Genesis used a Synclavier II (ORK version) on the albums, Genesis and Invisible Touch and their respective tours, along with solo albums and soundtracks of that period, Notably on “Mama” and “Home by the Sea”.

Suzanne Ciani used a Synclavier to design sounds for the Bally Xenon pinball game released in 1980.

Depeche Mode had access to producer Daniel Miller’s Synclavier, which was responsible for the character of the sound of Construction Time Again, Some Great Reward and Black Celebration.

Vince DiCola: used the Synclavier extensively in creating studio albums; also for soundtracks Rocky IV and The Transformers: The Movie

Michael Hoenig: film scoring work on the Synclavier, including The Wraith.

Trevor Horn: used the Synclavier to produce records by Frankie Goes to Hollywood, Yes, and Grace Jones (Slave to the Rhythm), among others.

Mannheim Steamroller: used on most of their albums to present

Michael Jackson: particularly on his 1982 album Thriller, programming by Steve Porcaro, Brian Banks, and Anthony Marinelli. The gong sound at the beginning of “Beat It” comes courtesy of the Synclavier.

Eddie Jobson: the 1985 album Theme of Secrets was completely made with a Synclavier.

Shane Keister: used in the movie Ernest Goes to Camp

Mark Knopfler: on The Princess Bride soundtrack (1987), with the exception of the guitar sounds, every sound is generated by the Synclavier, including hand claps. On Last Exit to Brooklyn (1989), all sounds except guitar and horns were produced by the Synclavier. Tracking for On Every Street was completed on a Synclavier.

John McLaughlin used it on the albums Adventures in Radioland and Mahavishnu. [/ebor_one_half]

Mr. Mister: used Synclavier on albums I Wear the Face, Welcome to the Real World, and Go On…

Danny Quatrochi used Synclavier on Sting’s album The Dream of the Blue Turtles (1985).

Howard Shore, film score composer: pictured with a Synclavier on the cover of Berklee Today, Fall 1997.

Alan Silvestri: in producing the scores for the 1980s films The Clan of the Cave Bear and Flight of the Navigator.

Paul Simon: on Simon’s 1983 album Hearts and Bones, Tom Coppola is credited for Synclavier for “When Numbers Get Serious”, “Think Too Much (b)”, “Song About the Moon”, and “Think Too Much”; and Wells Christie is credited with Synclavier on “Rene And Georgette Magritte With Their Dog After The War”. On his 1986 album Graceland, Simon is credited under “Synclavier” for “I Know What I Know” and “Gumboots”.

Sting (musician): used the Synclavier extensively in pre-production as he embarked on a solo career. “We Work The Black Seam” rehearsal on YouTube.

James Stroud: producer who used a Synclavier II on many hit albums he produced.

Mike Thorne: producer, one of first musicians to buy a Synclavier; used it on records by Siouxsie and the Banshees, Soft Cell (“Tainted Love”), Marc Almond, and Bronski Beat, among others.

Pete Townshend: started using the Synclavier since the recording of All the Best Cowboys Have Chinese Eyes and all albums after.

Triumph: Rik Emmett used a Synclavier 9600 around the period of Thunder Seven to Surveillance.

Whodini: Synclavier II was used on albums Escape and Back In Black.

Stevie Wonder: Used a Synclavier to sample the voices of Clair Huxtable and children in an episode of The Cosby Show.

Neil Young, who used an early Synclavier II on his 1981 album Re-ac-tor, and more extensively on his uncharacteristically electronic Trans (1982).

So, about the sound.

Judge for your self. Here is NED incredibly dorky demo album. See if you can pick out the where the sound at 6:40 comes from.

If you want more look here:

Synclavier Europe – Home for the Synclavier in Europe